The Wonder of the Holidays 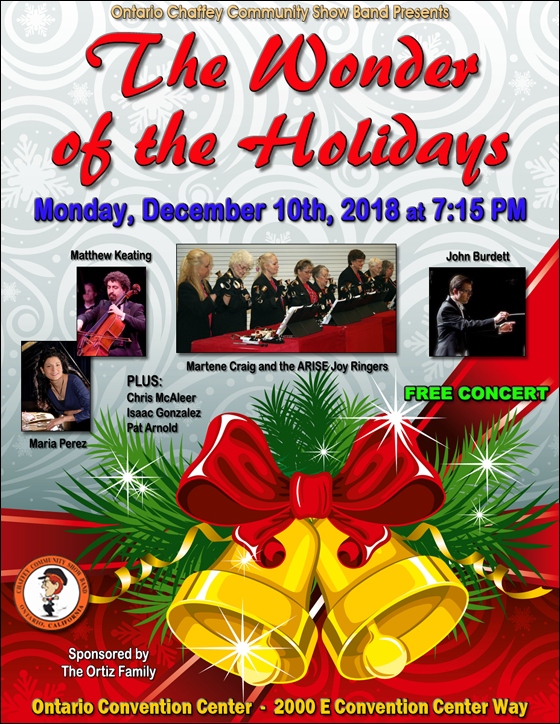 The Ontario Chaffey Community Show Band and the Ortiz Family are proud to present “The Wonder of the Holidays” on Monday, December 10, 2018 in the main ballroom at the Ontario Convention Center located at 2000 E. Convention Center Drive in Ontario.  Early concert goers are invited to come at 6:45 p.m. to hear “The Woodwind Celebration,” an ensemble of musicians from the Show Band.  Complimentary cookies and coffee will be served in the lobby of the main ballroom.  A pre-concert of Christmas music featuring the ARISE Joy Ringers bell choir will begin at 7:15 p.m.  The concert begins at 7:30 p.m. and is FREE to the public.

The program will include a number familiar holiday melodies and feature a cast of fantastic guest artists that include the ARISE Joy Ringers under the direction of Martene Craig, solo violoncellist Matthew Keating, and accompanist-concert pianist Maria Perez, Show Band members Chris McAleer, Isaac Gonzalez, Pat Arnold, and the outstanding musicians of the Ontario Chaffey Community Show Band.  The guest conductor is Dr. John Burdett, Director of Bands and Instrumental Studies at Azusa Pacific University.  The performance will be narrated by Ontario City Councilman Alan Wapner and newspaper columnist David Allen.  In addition, there will be a jolly visitor from the North Pole stopping by for a brief visit.

The concert repertoire includes a number of Christmas carols performed by the combined ARISE Joy Ringers and the Show Band that include “We Three Kings,” “March of the Toy Soldiers,” and “Carol of the Bells.”  Show Band Assistant Director Pat Arnold will perform a flute solo on “It Came Upon a Midnight Clear.”  Cellist Matt Keating will be featured on the timeless holiday favorite “Ave Maria” as well a new work composed for him by Gabe Petrocelli entitled “Holiday Rhapsody.”  He will be accompanied by the Show Band and concert pianist Maria Perez.  Chris McAleer and Isaac Gonzalez are featured vocalists on a medley of Italian Christmas carols entitled “Tu Scendi Dalle Stelle” and “Gesu Bambino.”  Chris McAleer will also sing the ever popular “White Christmas.”  The Show Band will be under the direction of Dr. Burdett for a number of selections that include Leroy Anderson’s “Sleigh Ride” and a special of arrangement of “What Child is This.”