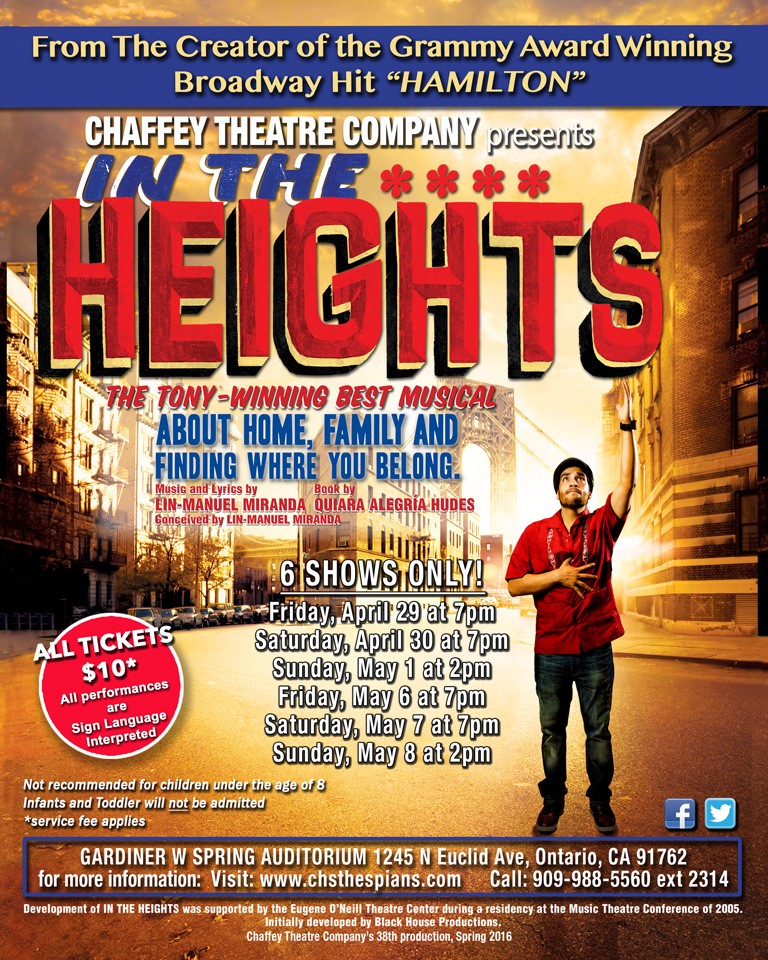 proudly presents for 6 dates only, the return of…

From the Creator of Broadway’s smash hit, HAMILTON

In the Heights was the winner of the 2008 Tony Awards for Best Musical, Best Score, Best Choreography, and Best Orchestrations!

Here is a brief synopsis:  “In the Heights tells the universal story of a vibrant community in New York’s Washington Heights neighborhood – a place where the coffee from the corner bodega is light and sweet, the windows are always open, and the breeze carries the rhythm of three generations of music.  It’s a community on the brink of change, full of hopes, dreams and pressures, where the biggest struggles can be deciding which traditions you take with you, and which ones you leave behind.”

Dave Masterson, Teacher and Director of the CHS Drama Department in Ontario, California, reports, “In the Heights was and continues to be perfect for our historic GWS Auditorium.  6400 patrons saw the show earlier in December. Our productions are very involved with a cast and crew often over 100.  We are proud to have been designated as having the Best High School Musical in the Nation as seen by 64 million readers of USA Weekend Magazine.  This will be our 37th show in 20 seasons of two major musicals a year.  We anticipate this show will move us well over 265,000 people attending in 20 years – a milestone for any theatre, especially for a high school!  In the Heights will be another exceptional production!”

*no one under 8 years of age will be admitted so bring the older children and grandchildren!